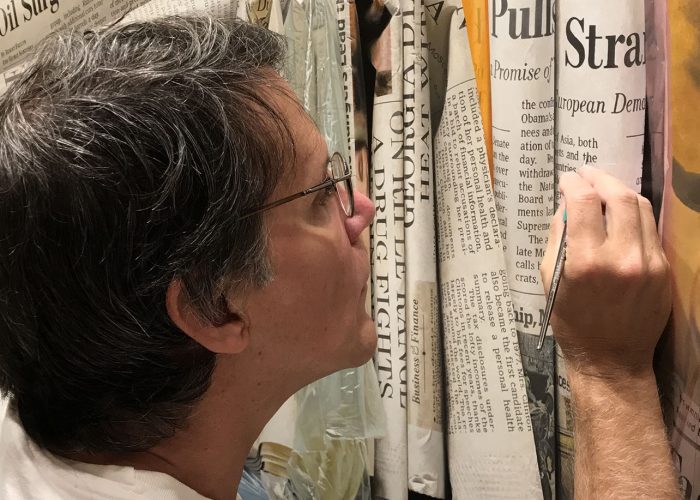 Every child drew when young, though Mills requested a pencil over crayons to get better detail. This fascination with detail became his calling card. He sold his first drawing at the age of 11 and has been selling ever since. He helped pay for his college degree by drawing yachts as a summer job on the docks of Menemsha on Martha’s Vineyard. Having never taken an art class in high school, and studying to be a musician, of all things he began college as meteorology major. This did not work well for him and ended up working in a factory for a year instead, bringing him to a new reality. He resumed his education at Bridgewater State College (Bridgewater State University) in Massachusetts where he became an art major. Realizing his talent through his painting professor, William Kendall, he embraced the art program, received his BA in Art and graduated magna cum laude in 1982.

A year out of college, his first solo show in 1983 was a smashing success, selling 33 of 35 originals at the Granary Gallery on Martha’s Vineyard. In 1989 he began his affiliation with Gallery Henoch in New York City. Between the 2 galleries, Mills has sold almost every piece he has painted. Producing and selling over 500 paintings in his first 20 years has had collectors literally waiting in line outside the gallery before an opening; creating such frenzy, one show sold out in 10 minutes. However, with the time it takes to paint in the photorealist technique – some paintings taking over 500 hours – it has proven impossible to do more than one gallery opening a year. Influenced by the works of Andrew Wyeth, his early paintings consisted mostly of landscapes. After seeing the work of Richard Estes at a show in Boston, MA, Photorealism became his passion. Today his interests are somewhat varied though his main focus is on the “extraordinarily-ordinary”. Mills takes your eye to a place where most would need a magnifying glass. Getting in so tight the viewer can see the stressed metal in a bottle cap or the texture of a newspaper.